In the first of a two-part series, Project Isizwe founder and serial entrepreneur Alan Knott-Craig debates where Africa’s first “unicorn”, an internet company with a billion dollar valuation, will come from.

A recent article on TechCrunch predicted that Nigeria would produce Africa’s first unicorn.

Saying Nigeria will beat South Africa is like saying New York will beat San Francisco. On paper it makes sense (growth, GDP, population, startup growth), but in reality the only way it will happen is through sheer randomness, in the same way Estonia produced Skype.

Why? Because successful internet companies are a function not of the size of the system, but of the complexity of the system. In tech, the winner has the most developed ecosystem of VC’s, engineers, infrastructure, creatives, etc.

Ecosystems have their own network effect which results in a winner-takes-all market. Second is nothing. That’s why Silicon Valley has won the race for global tech, period.

The only way the winner does not take all is if the government regulates the ecosystems to take away Silicon Valley’s “unfair” advantage. Telecoms regulators do this by forcing mobile operators to offer interconnects to other mobile operators. China has done this by erecting the Great Firewall of China to, amongst other things, protect local tech companies from US competition.

I don’t see Silicon Valley being regulated any time soon, so it doesn’t matter what NYC or Austin or Nashville or any other city in the US does, they simply won’t be able to catch up with the complexity of Silicon Valley’s ecosystem.

The same applies to Africa insofar that South Africa’s ecosystem (and infrastructure) is leagues ahead of the rest.

I agree with the article that a unicorn will come from Africa. And it will be tech with global applications. But it won’t come from Nigeria. It simply doesn’t have an ecosystem. Although Rwanda has the strongest public sector ICT policy (courtesy of President Kagame), and Kenya has the strongest bubbling tech scene (courtesy of the awesome efforts of the likes of Erik Hersman and Juliana Rotich), I don’t think either Rwanda or Kenya will produce our first unicorn either.

In spite of the fact that government support for ICT is poorly coordinated and our entrepreneurs are notoriously weak marketers, South Africa will win the race.

The simple fact of the matter is that neither Rwanda nor Kenya (nor Nigeria) can compare to the complexity of the South African ecosystem.

And you definitely won’t see any signs like this in Nigeria: 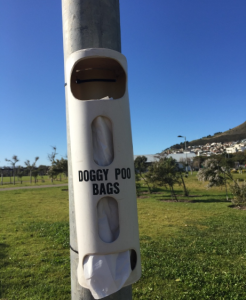 We have massive poverty, we have massive social challenges, in many ways we’re a third world country, and yet we have signs like this in Cape Town.

South Africa has already produced the biggest consumer web application on the continent in Mxit. Today’s stars include the likes of SweepSouth, Storie, Quicket and GoMetro.

I’ll wager US$100 that the unicorn will come from South Africa.

If I lose I’ll be happy to pay using BitX or SnapScan.

Key players from Africa's startup and investment ecosystem post on issues close to their heart for Disrupt Africa.