Whichever way you look at it, whatever figures you believe, whatever methodologies you employ, one thing is clear: 2021 was the best year ever for tech startup funding in Africa, with more startups raising more money from more investors than any year on record.

Indeed, not only was the US$1 billion ceiling smashed for the first time, according to our numbers here at Disrupt Africa, but the US$2 billion mark was also breached in a year that saw unicorns minted and records tumble.

At Disrupt Africa, we’ve always forecast an extremely bright future for the African startup ecosystem, but when we released the first edition of our annual funding report back in January 2016, I don’t think we imagined how bright it would burn, and how quickly.

According to the seventh edition of our African Tech Startups Funding Report, which is available free to all as part of an open-sourcing initiative in partnership with Novastar Ventures, MFS Africa, Quona Capital, 4Di Capital, MEST Africa and Future Africa, 564 African tech startups raised a combined US$2,148,517,500 in 2021. Let’s dig in to the numbers.

The wider ecosystem has seen incredible growth in terms of funded ventures and total secured capital, while individual markets and verticals also had bumper years. The number of funded African startups grew by 42.1 per cent on 397 in 2020, and the funding total was more than treble – up 206.3 per cent – the US$701,460,565 banked in 2020. 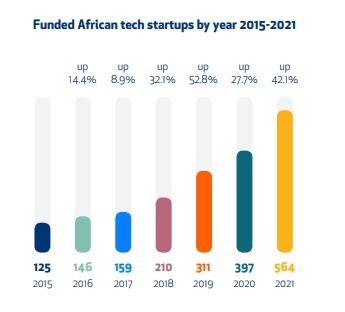 Compare this to 2015, the first year we began collecting data, when only 125 startups secured investment. The number of African startups raising funding each year has, then, increased by 351.2 per cent since then, while total funding has grown even faster. In 2015, the continent’s startups raised a combined US$185,785,500, and indeed this then fell to US$129,113,200 in 2016. Thereafter, however, the growth began, and 2021’s unrivalled successes means total annual funding for African tech startups has increased by 1,056.5 per cent since 2015. 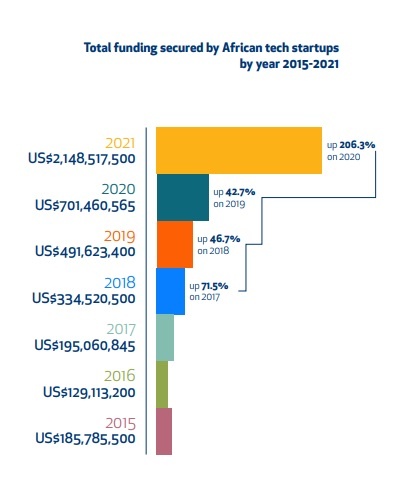 The average deal size has more than doubled year-on-year, increasing to US$3,809,428 from US$1,766,903 in 2020. Average deal sizes have risen, dipped and plateaued to varying extents over the past few years, but now seem to be on a general upward trend. A total of 205 startups raised US$1 million or over in 2021, representing 36.3 per cent of the total. This was up from 110 (27.7%) in 2020 and 81 (26%) in 2019. Meanwhile, the record for largest round ever raised by an African tech startup was beaten on multiple occasions over the course of the year, with standout amounts raised by Flutterwave, MNT-Halan, TradeDepot, Gro Intelligence and Yoco.

Unsurprisingly, given the fact total funding increased so substantially, a growing number of investors are active in Africa. Nonetheless, the scale of the growth in this regard is still very impressive.

There were at least 771 different disclosed investors in African tech startups in 2021, according to our report, an increase of 108.4 per cent on the 370 tracked in 2020. The number of investors in the sector has been growing exponentially, reflecting the wider publicity the space is receiving and the increased confidence in impressive returns.

These investors vary in shapes and sizes, with the most active being early-stage funds such as Launch Africa Ventures, Kepple Africa Ventures and Musha Ventures. Local and international accelerators are very active, among them the likes of Y Combinator, Techstars and Flat6Labs, while there are a number of very busy locally-focused angel networks. Increasingly, successful African founders, such as Paystack’s Shola Akinlade, mPharma’s Gregory Rockson, and Flutterwave’s Olugbenga Agboola, are starting to back startups themselves, speaking to the ecosystem’s growing maturity.

At later stages, there are a host of international and local VC firms active in the market, with the number of firms investing at Series A and beyond increasing by the year. Major global investors such as Tiger Global and Sequoia Capital have been taking their first steps in Africa of late, while there is also an uptick in African corporates supporting local startups, most notably in South Africa with the likes of Naspers, Standard Bank and Nedbank. With increased investor interest and activity at all stages, and longstanding funding gaps steadily being closed, the future health of the African startup landscape looks very good indeed.

For all its development, Africa is still relatively early-stage as a startup ecosystem, and this was reflected in the figures for stage of round and the age of funded ventures. Of the rounds raised by the 564 African tech startups funded in 2021, in 316 the stage of funding was disclosed. Of those 316 rounds, the majority – more than 70 per cent – were at the seed and pre-seed stage.

We are, however, seeing increasing activity at later stages, with 47 Series A, 12 Series B, and three Series C funding rounds taking place over the course of 2021, though investment in Africa remains an equity-focused game. Only 27 (4.8%) of the funded startups tracked for this publication reported any element of debt as part of any of their rounds.

Meanwhile, given the predominance of seed and pre-seed rounds, it is hardly surprising that the majority of the African tech startups that raised funding in 2021 were founded in the last three years.

As an early-stage ecosystem, the startup scene on the continent inevitably faces challenges around diversity. For all the positivity, African tech still indisputably has a gender problem, with only 121 – 21.5 per cent – of the 568 funded startups in 2021 having a woman in their founding team. 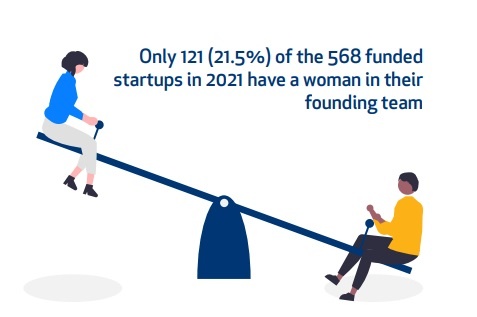 Meanwhile, loud debates were had over the course of 2021 around the funding of foreigner-founded startups by foreign investors in Africa, and indeed 11.3 per cent of backed ventures did not have a single African in their founding team. As the sector grows and matures, however, we would expect to see such issues addressed.

What cannot be denied are the achievements of an exceptional year, and we all keenly look to 2022 – which has started very well indeed! – to see what new records will tumble in the African tech startup ecosystem. Onwards!